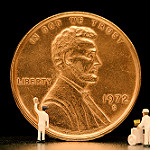 The EPCRS states that: “In general, a failure must be fully corrected. Although the mere fact that correction is inconvenient or burdensome is not enough to relieve a Plan Sponsor of the need to make full correction, full correction may not be required in certain situations if it is unreasonable or not feasible. Even in these situations, the correction method adopted must be one that does not have significant adverse effects on participants and beneficiaries or the plan, and that does not discriminate significantly in favor of highly compensated employees.”

As such, there are certain permitted exceptions to full correction of plan errors that allow employers to achieve compliance efficiently. For example:

Note that the exceptions to full correction eliminate the need to take small amounts of money OUT of participant accounts, in the interest of efficiency.  However, EPCRS specifically states that this exception does not apply to corrective contributions to participants with accounts under the plan, “which are required to be made.”   If the participant who is owed an omitted contribution is still employed by the company, the IRS would likely prefer that a restitution be deposited, even if an estimate must be made to complete the correction in a cost-effective manner.

The EPCRS states that: “If either

EPCRS provides several specific examples of situations in which estimates are appropriate:

An employer that misses a series of elective deferral deposits into the plan can assume that all missed contributions would have been made on the midpoint of the plan year, or portion of the plan year in which the omission occurred. This method is a practical alternative to computing up to 52 separate interest calculations. In this case, the results of an exact calculation would not be significantly different than those of an estimated contribution date in the midpoint of the omission period.

A Penny Saved is a Penny Earned

Arguably, small and rounding errors that would result in additional contributions of  less than a dollar per person could be considered trivial enough to be overlooked. The danger lies in the subjective determination of what’s trivial and who makes the call.  Most employers would say that a correction amounting to an additional $5 per person is too trivial to complete, but would an employee who contributes $5 per paycheck think the same way? Maybe, maybe not. As everything else in our field that is not black and white, what constitutes an amount so trivial that it is de minimis can be in the eyes of the beholder. Although we strive to be reasonable in our audit recommendations, there is always a chance that a regulator would take the position that a penny saved is a penny earned, so it should be contributed.