Tips and Traps of Compensation: Part III – Double Jeopardy: No Match on Catch-Ups and No True-Up 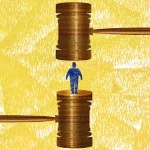 In our previous two blogs, The Trouble with True-Ups or Lack of True-Ups  and What’s the Catch with Administering Catch-Up Contributions, we went over the basic rules and potential pitfalls of administering true-ups and catch-ups. When both go wrong, the plan sponsor experiences a “risk or disadvantage incurred from two sources simultaneously,” the definition of double jeopardy.

As bad luck may have it, a plan that doesn’t match the catch-up AND doesn’t have a true-up provision faces an unintended consequence: Catch-up-eligible participants that can never get the maximum match to which younger participants are entitled.

Participants under 50 who contribute the maximum under a plan that matches $1 for $1 up to 5% of eligible compensation would receive a $14,000 match as follows:

Since the deferral withholdings must be maximized first, before classifying any deferrals as a catch-up, and the match contribution is computed each payroll, without a true-up provision, a catch-up-eligible participant would only receive a $10,750 match under this plan, or $3,250 less than a participant under 50 with the same salary contributing the maximum deferral under IRC Section 402(g). Unfortunately, the employer contribution formula unintentionally would cause a detriment to catch-up-eligible participants:

The human mind likes symmetry. To create consistency, sometimes well-meaning employers think that it is appropriate to code the payroll to allocate deferrals and catch-up contributions evenly between payrolls, rather than maximizing the deferral first. In these cases, the payroll system would allocate the full $14,000 maximum match to a catch-up-eligible employee in a plan that doesn’t match catch-up contributions and does not have a true-up provision, as follows:

*Administratively, payroll was coded to split the deferral and the catch-up evenly so that the participant would receive the maximum match.

Since participants who contribute the catch-up generally also contribute the maximum 402(g) deferral amount, the Rev. Proc. is timely good fortune allowing these employers to conform the plan provisions to plan operations. In the handful of partial year eligibility cases in which a participant did not maximize the deferral but shows a catch-up contribution, if the deferral was less than 5% of each payroll, the employer would have to reclassify the catch-up as a regular deferral and deposit a corrective contribution for the match. In most cases, the deferral percentage already equals or exceeds the match threshold, 5% in this example, and no correction is needed.

Although philosophically, one could appreciate that an employer that doesn’t want to match the catch-up intended to be fair and equitable to all employees, regardless of age, the unfortunate outcome is a detriment to the older participants if the plan doesn’t have a true-up provision. No match on catch-up coupled with no true-up provision may be an unfortunate combination with unintended consequences, but Rev. Proc. 2019-19 provides a solution with minimal to no cost in the form of a corrective contribution:  Double Jeopardy turned Price is Right!